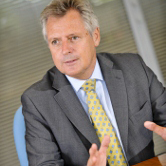 Richard has been a Director with blue chip organisations such as the Independent Television Commission (ITC) and the Audit Commission (AC) and spent 10 years as the Controller of Communication for BBC News. He was also the first Director of Corporate Affairs for the England and Wales Cricket Board (ECB). He held a similar post with Camelot Group plc, the operator of the UK's National Lottery, when it secured its Third Licence bid.

He has extensive contacts in Government, Parliament, the Civil Service, Royalty, all the leading broadcasters, the national newspapers and amongst key opinion formers. His network is strengthened through his fellowship of the Royal Society of Arts (RSA) and membership of the Chartered Institute of Marketing (CIM).

He is also a Fellow of the Royal Television Society (RTS) and has judged their Journalism Awards on a number of occasions. He is a lifetime member of the British Academy of Film and Television Arts (BAFTA), an alumina of the London Business School and a member of the Media Society. Richard is a member of the European Centre for Public Affairs (ECPA) and has attended their events in Brussels and Strasbourg.  He is a Director and Trustee of Youth Music and an advisor on communications to the Rennie Grove charity.

Through his work running communication teams and managing change in dynamic organisations Richard can draw on specialist support in events management; website development; brand management and design and lobbying.

His previous achievements include managing the public relations around the launch of the BBC’s Online service; BBC 24 Hour News; BBC Radio 5 Live and the cricket World Cup.

He has been involved in developing the image, brand and positioning of BBC News, the ITC, ECB, Ofcom, where he worked for six months to launch their communications operation, and the Audit Commission, and has refreshed and re-energised supporting communication around these changes by enhancing websites, publications, events management and media contact. At Camelot, he brought together all the key external and internal facing stakeholder teams into a single department

He has appeared in Parliament before Select Committees and the Scrutiny Committee established for the last Communications Bill and launched a nationwide campaign on public service broadcasting culminating in the publication of What Viewers Want on behalf of the ITC.

His work has spanned all dimensions of communication, including managing internal communications and crisis management, ranging from arguments between the BBC’s Management and Board of Governors and IRA threats to a senior BBC manager, to debates between Parliamentarians and the ITC about changes in commercial broadcasting.